Storydwelling has many leaders! From tending to our weekly gatherings, to facilitating small groups, to being at the helm of organizing and justice work, we are a community made of leaders. Here are a few of the folks setting priorities and making decisions in the life of this community. 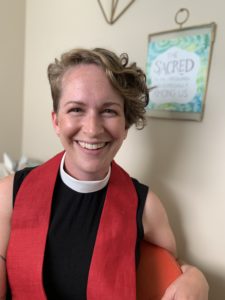 Erika is originally from the Garden State and moved to Portland after college to cut her teeth as a community organizer and live in intentional spiritual community through the Jesuit Volunteer Corps NW. While in Portland, Erika learned how to tell her story and preach the good word alongside the beautiful souls at the Leaven Community. Erika graduated from Pacific Lutheran Theological Seminary in Berkeley, California, and most recently served The Bridge, a coffee house ministry in St. Charles, Missouri. She is married to Tom, a graphic artist, who is required to call her “The Rev.” She enjoys cooking, reading, singing lullabies to her son, Theo, and spoiling her pup. 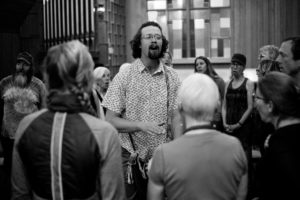 Ian’s mom said he always belted louder than all the other 9 year-olds. But when he was 13 other boys said he had a bad voice. So he stopped singing. Slowly, with the encouragement of many, Ian began to rediscover his natural ability and birthright to sing. After a decade of searching for a truly communal form of music, today Ian dedicates himself to the vision of a world where the act of singing together will feed our collective hunger for a more beautiful world, giving birth to practical systems of resilience and renewal. 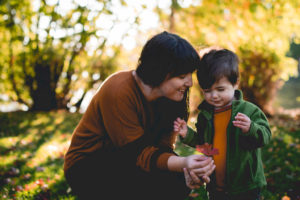 Living the motherhood life as a spiritual practice, singing lullabies as prayer, and coming home to the breath during the 1000 joys and 1000 sorrows each holy moment brings.

You can usually find her either reading a book by some spiritual mystic or walking with other moms and strollers all around Bend.

Recently, after leaving her teaching position as a reading specialist, Joslyn now continues to grow her understanding of play as the foundation of all learning.

Ted Kallmyer
Chair, Board of Storytenders

Ted has lived in Bend, Oregon for 4 years and moved here with his husband, Joshua, from San Diego. Ted loves exploring the mountains, rivers, and lakes of Central Oregon and is one of the founding members of the Storydwelling Community. He is also an author and nutritional coach and enjoys spending time with his goldendoodle named Koa.

Tommy Airey
Board of Storytenders

Tommy Airey was born and raised on stolen, unceded Acjachemen territory (“Orange County, California”), was transformed by the thin place the Ojibwe, Huron and Odawa call Wawiiatanong (“Detroit River”) and has entered the sacred “hidden waters” the Molalla and Paiute named Towarnehiooks (“Deschutes River, Oregon”). He and his wife-partner Lindsay work for Kardia Kaiomenē, a community-supported non-profit, partnering with families and faith communities to equip and accompany all those whose hearts burn for intimacy, community and justice. Tommy’s articles have appeared in The Christian Century, Sojourners Magazine, The Mennonite and Geez Magazine. He is the co-curator of RadicalDiscipleship.Net, book review editor for Geez Magazine and author of Descending Like a Dove: Adventures in Decolonizing Evangelical Christianity (2018).

Greg Lamont
Board of Storytenders 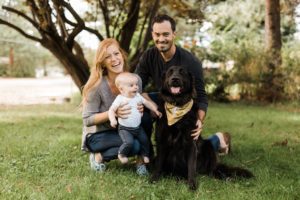 Greg and his wife Casey have lived in Bend since 2013 and love to hike, bike, and snowboard as often as possible. They and their dog Zia just welcomed their first child, Milo, into the world on April 24, 2019. Watch for Milo on the slopes of Mt. Bachelor as soon as he’s able stand!

Jessica Mardock
Board of Storytenders 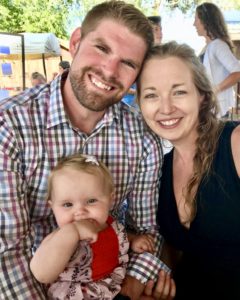 Jessica and her husband Andy have lived in Bend since 2017, when they moved from Denver, Colorado. Being outdoors enthusiasts, they enjoy Central Oregon’s access to nature, including the mountains, lakes, rivers, hiking and biking trails, skiing, and the short distance to the coast! Jessica is a founding member of Storydwelling and seeks to spend her time adventuring in one way or another with family and friends! She is a dedicated steward of the environment and can often be found educating her daughter on the finer points of gardening, baking/cooking, singing/dancing, and finding the best tree to hug while recharging in nature.

Kelly Ripley
Board of Storytenders 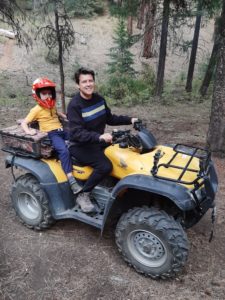 Kelly is honored to be on the Storydwelling Board. Her priorities in life are to have healthy spiritual, physical, mental and emotional connections. She value connections with people and spirituality, which is why she is committed to Storydwelling. She has been in Bend for 16 years and loves the outdoor beauty and activities. Although she has a Bachelors Degree and a successful career in outdoor recreation working for the federal government for 31 years, her most prestigious role in life is being mom to her most beautiful son Gage! Her motto in life is “Live Large and Love Larger!”  Life is short, eat dessert first! She is blessed on this journey, so she wants to give back!