Word of God: In which I try and work out my relationship to the B-I-B-L-E

The Bible can feel so…what’s the word I’m looking for? Wounding? Irrelevant? Unbelievable? Here’s my attempt at starting a conversation on how we can claim the Bible in its wisdom in ways that make us better lovers of neighbor and self.

This is the fourth in our series on disrupting, reclaiming and expanding parts of Christian language, tradition and ritual for our lives and experiences here and now.

Disruptive Dwelling: You Don’t Get Assassinated for Preaching About Love 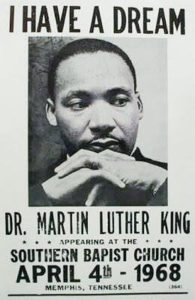 This is the conviction that lies underneath #whitechurchsilent. #whitechurchsilent is an online movement started in the wake of the 2016 election. It describes the phenomenon that occurs when pastors, leaders and congregations that are mostly white, that belong to mostly white denominations, that were started by white people, choose not to speak explicitly about the injustices and violence done to black and brown people in our neighborhoods and country.

Instead, we talk about love. Which is almost like not saying anything at all.
Which is why you don’t get assassinated for preaching about love.
Which is why I, and many of my pastor-preacher-minister-type colleagues are going to be just fine.

We are safe when we are being called to be bold.
Like the Rev. Dr. Martin Luther King, Jr., who was assassinated in Memphis on this day in 1968. For preaching about love–and how it cannot be decoupled from power and justice.
“We’ve worked hard to create a vision of King that is like a black Santa Claus,” says Charles McKinney, associate professor of history at Rhodes College. (I listened to his interview today on The Takeaway from WNYC; you can (and should) listen to it, too.) In other words, popular American culture memorializes Rev. King as someone who preached about love, and it has forgotten that he was called to Memphis to defend and affirm the lives of sanitation workers who were on strike, to challenge the city to give them a living wage. It was part of a campaign he was igniting to restructure the fabric of human life in the United States and to confront the reality of poverty.
You don’t get assassinated for preaching about love, remember?

So this is my commitment: to expand my imagination and my heart in ways that move me from safe to bold. To let you, my friends and neighbors, invite me into that transformation. It is not always easy to imagine what Rev. King’s work might look like in Central Oregon; at least three times a week someone tells me “how white” it is here. We can debate that informal (and changing) statistic, but the real question is: do we here in Oregon not still see the three main evils Rev. King was called to challenge?
Racism; militarism; poverty.
Those among us who are undocumented know these evils.
Those among us who are underemployed and unsafely housed know these evils.

At Easter, I, alongside many others, celebrate the persistent life of the One who got assassinated for preaching about love that transforms the powers of the-world-as-it-is for the sake of justice on earth as it is in heaven.
May we listen to such bold calls and live by such bold examples.
Alleluia.
Everywhere.

This is the third in our series on disrupting, reclaiming and expanding parts of Christian language, tradition and ritual for our lives and experiences here and now.